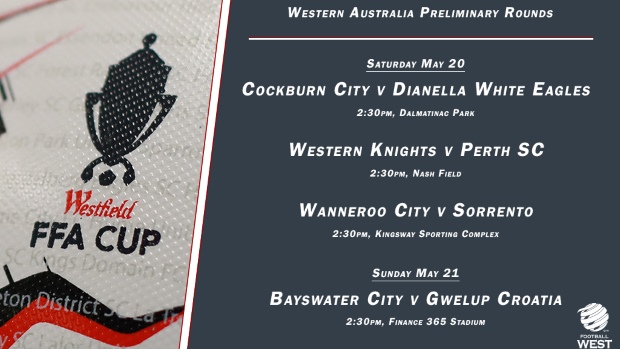 In the final Saturday game we have a Northern Derby with Division Two side Wanneroo City entertaining NPL powerhouse Sorrento at Wanneroo Reserve. Sorrento, who have won the cup three times, the last in 2015, edged out UWA-Nedlands in the last round, while Wanneroo were given a forfeit against Boulder City. Wanneroo sit second on the league table, and new coach Tim Kantor has moulded a new look side and he said a good cup run is good for the club, but he was very disappointed after the forfeit in the last round. “Yes we’ve had a good cup run and a bit disappointed with Boulder having to forfeit last round,” he said. “I’m not sure what the answer is but amateur clubs can’t be expected to travel 700kms to play a game of football mid-week.” The Roos are coming off a big win at Swan United last week in the league, and Kantor said his side are playing with confidence at the moments. “Yes we have started the season really well and we now have a strong young squad that should be competitive,” he said. “We have score 20 goals in our opening six fixtures and we hope that trend continues on Saturday.” Wanneroo were in the Premier League in 2006 – 07, but almost dropped out of the league last season and Kantor is hoping they can climb back up there in time, and Saturday’s game will show where they are at. “If not for Ellenbrook last season we would be playing Sunday Amateurs this year. To the clubs credit they made a decision at the end of last year to put a plan in place to get Wanneroo back to its glory days. It’s a long process but we are now moving in the right direction both on and off the pitch,” he said. “Saturday is huge for our club and our young squad. We are certainly not under any illusions, we are playing an NPL giant in Sorrento but we are going to give it our best shot and we’ll see what happens. We have organised for our game to be live streamed on Saturday so punters can keep abreast of proceedings at Wanneroo.

Sorrento Coach Jamie Harnwell said UWA took it up to them in the last round, but it was a professional performance from his players. “UWA caused us a few problems throughout the game, but even when they equalised I felt that we had enough quality to still go on and win the game,” he said. “We certainly had to work hard for it, but in the end I felt it was a deserved result on the balance of chances created.” The Gulls took on Sydney FC in the FFA Cup round of 32 in 2015, and despite a good performance were edged out, and Harnwell said that night was a great occasion for the club and one they want to repeat. “I think everyone looks at those big ties and want to be a part of them, but there is also the ambition to be the first WA club to get past the round of 32,” he explained. “The players, officials and supporters all enjoyed a fantastic night out at NIB and are keen to do it again, but that hasn’t entered the players or coaches minds yet – we know what cup football can bring.” Harnwell knows that Wanneroo will be up for Saturday’s game, and he is well aware that cup football can be a great leveler. “It’s not going to be an easy game and I’m sure Wanneroo will relish the chance to knock off one of the NPL clubs,” he said. “We will need to match them for work rate and enthusiasm to gain control of the game, and then we know we are always likely to score goals. Our performance against Subiaco on the weekend in the NPL was starting to get back towards our best, so we will look to continue that.” – Saturday (2.30pm) – Wanneroo City v Sorrento – Wanneroo Reserve – Referee – David Bruce