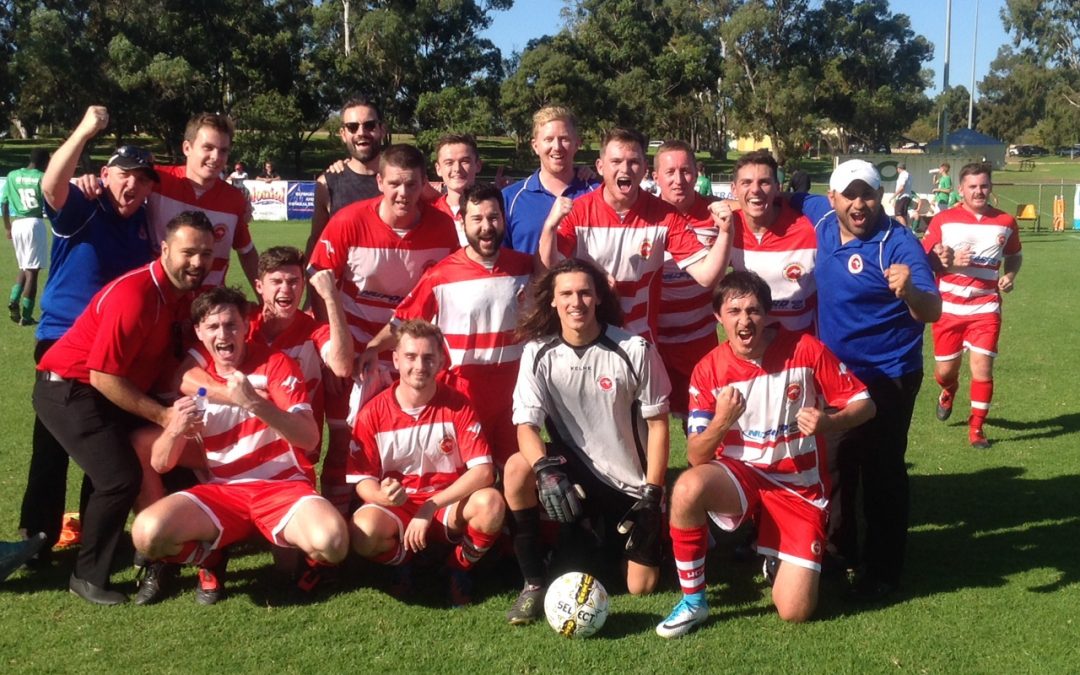 Wanneroo City Reserves come from 3-0 down at Half time to win 4-3 in dramatic circumstances deep into Injury time  on Saturday.

It was a game of “two halfs” says Reserve Coach Brad Hayward. We started poorly and yet again conceded in the first 15 minutes with the lads caught napping inside our own box, Allowing for a great strike from the Kingsway forward into the top corner. We never really got going at all in the 1st Half and it wasn’t long before a 2nd (for Kingsway)  this time a poor back pass allowing the Kingsway 9 to yet again nick the ball and slot calmly past our GK. Matt Hatton came close to giving us a goal with a thunderous strike from distance that cannoned off the bar but the panic then set in and we could have gone 3 or 4-0 down early if not for some great shot stopping and quick thinking from new GK signing JJ Godfrey. We looked like we might be starting to get a foot hold in the game before a poorly defended corner presented a 3rd goal for Kingsway with the ball left unchallenged in our box making for an easy finish. Kingsway absolutely dominated us 1st half it was a beating we had seen last week against Gwelup too.

Half time came with our boys facing a huge uphill challenge and although we had already shown our resilliance  coming from 2-0 late on against Curtin (on opening gameday) to draw 2-2 I don’t think many would have expected us to come out with a result. I have to give the lads credit dispite being 3-0 not once did anyone seem to even suggest that we couldn’t win that game and they set a target of scoring inside the first 10-15mins of the 2nd Half.

The 2nd half started with a bang! Nathan Smith grabbing our 1st, from a well placed Matt Hatton free kick and we started to grow in confidence. (VCapt) John McNeil (Reserves top scorer) came on from the bench for Brandon Oosthuizen and looked dangerous overtime we got forwards. (VCapt) Rab Handbali was brought down by injury and Thane Liem replaced him and immediately controlled the midfeild with a Man of the Match Performance. David Rossetti was replaced by Ryan Brown on 60 Mins and we suddenly started to dominate across the park. Matt Hatton being brough down inside the box after some great link up play but unfortunaltley hitting the post with his penalty effort. We immediately won the ball back and up popped John McNeil with great strength inside the Kingsway box slotting the ball into the corner to make it 3-2.

Tempers began to flair and the yellows started to come out for both sides. We continued to press and the lads could sense we would get a result, it was one way traffic. Matt Austin, Ryan Brown & Thane Liem kept us going with some fantastic 1 touch football winning every 50/50 ball but it was the big man up top John McNeil that brought us back to 3-3 (his 5th for the season) chants of “he scores when he wants” came from the Wanneroo faithful on the touchlines and Wanneroo had 5 minutes to find a winner. We pressed and pressed but time was running out. A foul on half way from us saw a Kingsway lad see red after causing a scuffle retaliating to the foul. We sent everyone forwards, the ball was played down the middle to Matt Hatton who took it at pace, into the box past a defender and putting the ball into the bottom corner. 4-3 and wild celebrations from the Wanneroo Faithful!

“Its nothing like I have ever experienced before as a player or coach” said Brad Hayward, that never say die attitude will make us hard to beat this season and it pulls up back to within 3 points of top spot. I couldn’t be prouder of the lads and I want to congratulate them on such a fantastic display. We are a force to be reckoned with and I can’t wait for this weekend against Kelmscott to try go top with Quinns.

“A Red Moon is Rising”

Man of the Match: